Built in the early 20th century, commissioned by senator Giaracà the palazzo reflects the Umbertino style. Developed on two storeys it is a well defined and isolated four sided building, with all the prospectuses similar in style, metric length, décor and colour.
The first storey, consisting of a lower part of light coloured calcareous stone is ornamented by portals and windows with arches, surmounted by arched mouldings.
The main prospectuses are graced with a central portal flanked by two side doorways alternating with four windows, whereas on the minor prospectuses there are three portals and only two windows. A horizontal moulding separates the first storey from the second and the pink façade of the second level is well defined both on the superior and inferior limits by two wide indented horizontal string courses with corners conforming to the classic Corinthian style. The only exception to the regularity of the second storey on the north prospectus, is the presence of an corner covered loggia delimited by three pillars, one central and one at each end, with classic intermediate columns at intervals set between them.
Inside, the palazzo shelters an internal courtyard with pillars, string courses, Corinthian capitals and dome vault. A wide staircase leads up three flights of stairs to the second storey while the courtyard itself illuminates all the internal apartments and the ground floor storerooms. 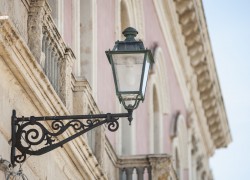